Biola Through the Lens of President and Parent

Book excerpt from 'Make the Most of It' by President Barry H. Corey 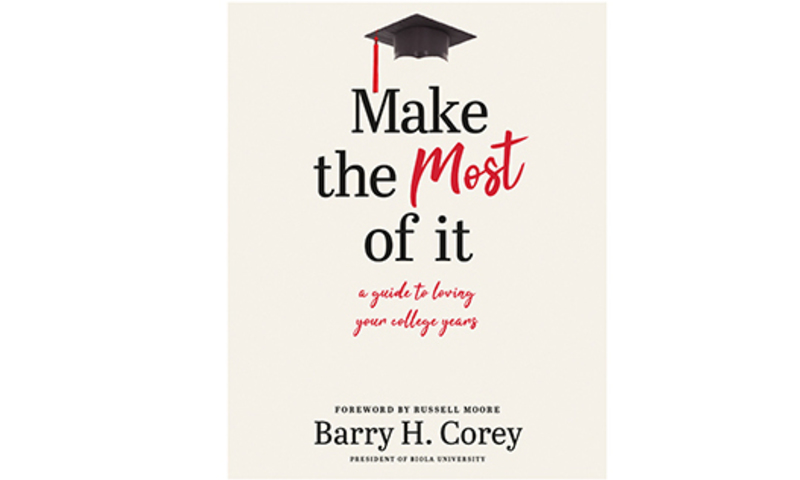 Four years after starting my job as the university’s president, our oldest graduated from high school and decided to attend Biola. Given my role at Biola, I knew it was going to be interesting — for him and for me.

His challenge was to figure out how to navigate college life as the son of the guy who runs the place. Thankfully, on most days he did figure it out, neither shrinking nor overplaying. As often as we could, we even managed to have weekly one-on-one breakfasts in the cafeteria.

Three years later, our second enrolled. Three years after that, our third.

With all three of our children, the challenge was to trust that a Biola education was all I believed it to be.

When our first started, I had a moment of panic, wondering, What now? For four years, I had tried to impress upon parents of incoming students how important these college years are. I reminded them that the Biola University community would strive to come alongside their daughters and sons to educate them into contributing citizens of society. At new student orientation, when everyone was moving in, I told parents how much we care about the whole person. That’s why our students’ composure, conduct, decisions and relationships matter. Faith development. Character formation. Intellectual maturity. Integrity in decisions. Global awareness. Cross-cultural humility. Vocational preparation. Life in community. Biblical depth. Christian thinking across disciplines. I’d share with parents that these would be the areas in their children’s lives we’d work to mature as they transitioned from teenagers to adults.

Then I became the parent I had been talking to.

What I wanted for the thousands of parents I spoke to year after year I also wanted for Paula and me. I wanted their children to love college, even when it was hard. I wanted them to be surrounded by competent and caring staff as well as exemplary faculty who not only were at the top of their games academically but also cared about the students. I wanted to hear stories about professors who counseled them on the content of their courses and the curriculum of their majors but who also advised them on the contours of their lives.

I wanted to see the richness of a Christian liberal arts education, guiding them into becoming bright and articulate grown-ups. I wanted them prepared for a vocation, not only three years after college but 30. I wanted them to come home for the holidays, engaging Paula and me in thoughtful conversations and demonstrating their own learning and maturity. I also didn’t want them to forfeit the values important to us as a family. The gifts they had — like kindness and curiosity — I hoped would grow in college. And I wanted them to learn to work through their faith pilgrimage in a way that made it their own.

In the end, each seemed to traverse the college landscape pretty well as the president’s kid. I’m happy to report all were up for regular breakfast dates with Dad. Two are now college graduates thriving on the other side of undergraduate life. Our third will be a senior next semester. A year from now, we’ll be preparing to celebrate his college graduation.

I am happy to say that so much of what we hoped for in our children through their Biola education has been our story as parents. We’ve not only observed our children, but we’ve come to know their friends. I have seen many college students, not just from the perch of my leadership but also from the porch of our home, as our children have brought their classmates into our lives. I am optimistic about the future because I’ve seen firsthand these Biola students with ambitions to make a difference in their worlds for the good.

Now, with the last of our children nearing the other side of college and with our nest mostly empty, we are profoundly indebted to those faculty and staff who — many for decades — have semester after semester invested in the well-being of this rising generation, including our own kids. Thank you, Biola, from a grateful father.

BARRY H. COREY is the eighth president of Biola University. This adapted excerpt is from the postscript to parents in his newest book, Make the Most of It: A Guide to Loving Your College Years (Tyndale House, March 2020).