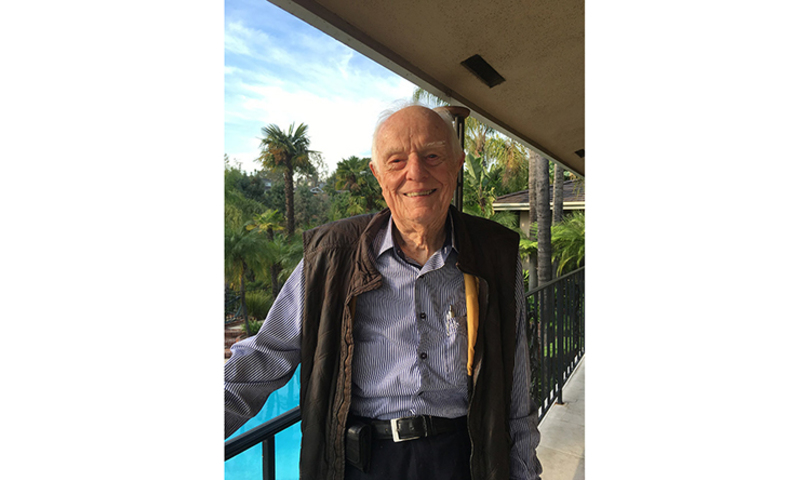 Looking out his southern-facing windows, David Maddox has an unobstructed view of Orange County from his home in the hills of Fullerton, California. It’s why, as a real estate developer, he and his wife selected this lot to build their home almost 50 years ago.

It’s not hard to imagine Maddox looking farther south all the way to Belo Horizonte, Brazil, where he was born to American missionaries 94 years ago. He remains fluent in Portuguese and has visited Brazil often over the decades. He was there in 2018 to celebrate the 100th anniversary of the school his mother started with 14 students. Today there are multiple campuses serving more than 8,000 students from nursery school through university.

But Maddox isn’t living in the past. He loves the present and is most proud that he knows Jesus.

“He influences every area of your life,” said Maddox, who despite never attending Biola, has been a faithful giver to the university since 1997. He recently became the 101st person to be inducted into Biola’s Bell Ringer Society — a group formed to recognize supporters who have achieved significant lifetime giving milestones.

Maddox has known and been influenced by Jesus for a long time. He served at the American Embassy in Rio de Janeiro and later in the U.S. Navy during World War II, before he moved to the states to attend college in Texas. After graduating, he began a career as a real estate developer and married his wife, Dorothy. They contemplated going to the mission field, and they did, in a way.

In 1956, the Maddoxes moved to Southern California. In those boom years, the flood of families moving to the emerging suburbs provided a great mission field for a Jesus-loving real estate developer.

Maddox actively served in his church and viewed his business as an extension of his family.

“I’m a real estate person and have apartment buildings, but I enjoy the people who work with me more than the ownership of the properties,” Maddox said.

In the early 1990s, when others his age may have been looking to retire, Maddox was still forging new relationships and finding new opportunities to serve Jesus. Over Sunday lunches after church, Maddox and Biola’s then-president, Clyde Cook, became friends. That’s when Maddox began to financially support Biola, and he hasn’t stopped since.

“Biola remains a spiritual school,” Maddox said. “So many wander away from their roots, and Biola has stuck with it. I enjoy what Christian schools like Biola are doing, and that’s important as our country’s population gets so much larger and needs the Lord.”

He continues to support Biola and other Christ-centered ministries. “If you’re a Christian, I don’t see how you cannot do it,” Maddox said. “You have to become involved, usually by helping give. It would be a sad thing not to be involved in what has been so helpful to you in the past.”

As he looks out his window today, it’s clear he’s still looking ahead.