It doesn’t happen routinely, but when it does, “intellectual conversion” is a pretty exciting phenomenon to witness. In my over 70 professional academic presentations, what I recently witnessed during my time in the U.K. was exceptionally good.

I was at Wolfson College, Cambridge University, where I presented a paper titled “Artificial Intelligence and Metaphysical Limitations” at a theology and science conference. In my paper, I critically examined AI, a growing topic of interest that involves software or computer systems that emulate aspects of human cognition, and combined it with my expertise in philosophy — specifically metaphysics, the study of the nature of reality.

My paper critically examined one of the key claims of the proponents of the Strong Artificial Intelligence (Strong-AI): Given enough complexity, future machines can literally be conscious like human beings and thus, engage in cognitive activities such as perception, learning and decision-making. Against such claims, I raised two largely ignored problems in contemporary discussions on Strong-AI, namely the maker-product gap problem and the wrong location problem, respectively. The former problem arises partly from assuming that AI can be superior to the natural intelligence, whereas the latter problem arises from misunderstanding the nature of the relation between natural intelligence and artificial intelligence attributed to machines.

After my time at Cambridge, I had a chance to attend another meeting in the U.K., where I ran into a computer science expert who teaches at a world-class university. I immediately took the initiative of sharing with this expert (a Strong-AI proponent) the content of my paper. I explained to this expert why on metaphysical grounds the central claims of Strong-AI are unachievable. In explaining this, I used a simple mathematical model, describing it as n + 1. This simple mathematical function is intended to show how human natural intelligence can never be overturned, no matter how much the computational capacity of machines increases. Necessarily, human intelligence will always be a step ahead of artificial intelligence, so machines will never be able to catch up with human natural intelligence.

As I was explaining my objections, the computer expert paid close attention to the simple equation above. In response, the expert raised objections against my position, using a more complicated mathematical model. I responded why the mathematical model the expert had suggested cannot overturn my metaphysical objections. So the conversation between myself and the expert, although completely civil, seemed to have ended in pure deadlock. But I had no idea what was going on in the expert’s mind while we were having this intense, but intellectually rewarding exchange.

The following day, the expert and I met again and spent more than two hours discussing what can and cannot be achievable in computer science. Then came the unforgettable moment! The expert told me that after our initial conversation, the expert spent several hours thinking about some mathematical ways to undermine my objections. But the expert told me that the mathematics, in fact, entirely seems to be on my side in showing the impossibility of the central claims of Strong-AI.

Then a joyful glow came over the expert’s face, so I asked what was happening. The expert told me that my objections against the central claims of Strong-AI are not only convincing but also powerful enough that they strongly indicate the mathematical impossibility of producing consciousness in machines. The expert then gave me a page-long mathematical equation the expert called “Mihretu’s Proof.”

The expert and I had a great time. We even decided to collaborate on future research and are planning to work on a technical paper related to AI. Since our conversation, I have refined my paper in great detail and am now preparing it for publication in a peer-reviewed academic journal.

Serious intellectual conversions do not happen on a routine basis; but when they do occur, they are like a little tsunami.

Mihretu P. Guta (M.A. ’09, M.A. ’10) obtained his Ph.D. in philosophy from Durham University in the U.K. He is an adjunct professor of philosophy at Biola University. Anyone interested in seeing “Mihretu’s Proof” can contact Mihretu at mihretup@aol.com. 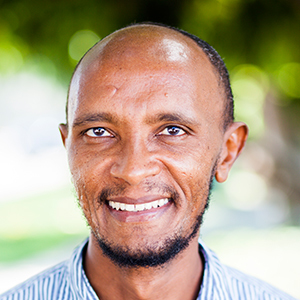