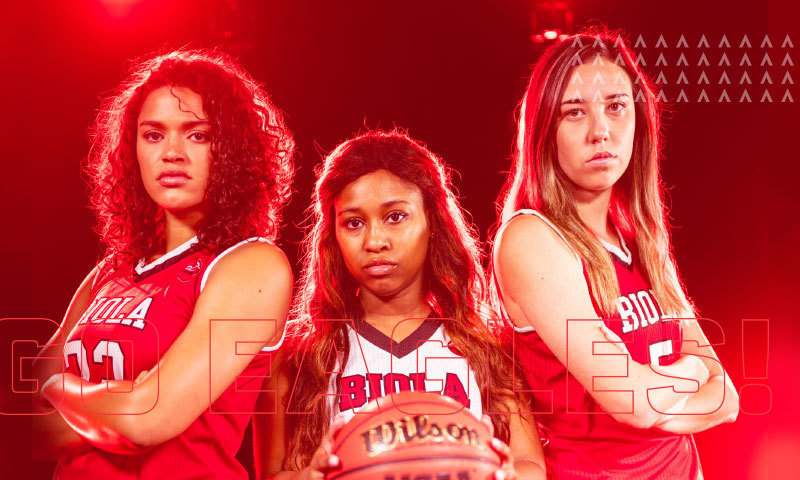 Mid-July is an otherwise quiet time on Biola’s campus, but on July 12 there was one office buzzing with excitement. Inside the Biola Athletics office, the walls and the floor were covered in protective plastic because something was about to happen — and it was going to be messy. When the moment came, the staff popped open bubbly bottles and excitedly started spraying Martinelli’s apple cider in every direction, aiming for one another and drinking celebratory swigs. It was official: Biola had just been approved a full member of the NCAA.

“I am deeply grateful for the many staff members throughout Biola who have worked so hard to make this day a reality,” Biola President Barry H. Corey said in an announcement that afternoon. “Many institutions have fallen short in the quest for NCAA membership. Not so with Biola. Biola has been viewed as a model institution in the process, thanks to the work of so many.”

With the start of the fall 2019 season in September, Biola’s teams and nearly 300 student-athletes are now eligible to play in postseason competition regionally and nationally, and have access to NCAA grants and funds. Biola has been a provisional member of the NCAA since 2016, but as a full member, student-athletes, coaches and staff, as well as Biola administrators, are looking forward to a new era of competing at a higher level.

“It’s exciting to now have access to PacWest Conference and NCAA Division II postseason competition and benefit from the other perks of full membership in NCAA Division II,” said Bethany Miller (’03), senior director of athletics. “We look forward to seeing our student-athletes and coaches all push to reach new heights of success this coming athletic season.”

THE JOURNEY TO DII

Biola’s Board of Trustees unanimously voted to pursue NCAA Division II in January 2015, but it was more than 10 years ago when the board first considered making the shift. In the lead-up to the move from its former home in the National Association for Intercollegiate Athletics (NAIA), Biola had been growing steadily in size and competitiveness. Meanwhile, some of the university’s top rivals had already made the transition to the NCAA, leaving Biola in the company of mostly smaller Christian universities and liberal arts colleges, with Biola feeling like the odd school out. By the time the university filed a formal application to the NCAA in early 2016, it was clear to many that the time was right to move into a new era.

To walk Biola through the three-year membership transition, Biola hired Miller as its first full-time athletic director, filled its roster with a full-time compliance officer and worked with Strategic Edge Consulting. Throughout the process, Miller and the athletics office collaborated with several departments across campus, trained all the coaches and administrators on NCAA compliance, and hosted several NCAA staff visits.

“I have been so impressed with how seamlessly Biola moved through the membership process to NCAA DII active status,” said Bob Hogue, PacWest Conference commissioner. “From day one, Bethany Miller had her staff on board, working hard in an extremely efficient and very positive manner — the Eagles have been a joy to work with. We’re so proud to have them in the PacWest.”

After entering the membership process, Biola had two years of provisional NCAA competition from 2017 to 2019, revived its long-held rivalry with Azusa Pacific University after a five-year pause, and participated in postseason competition under the National Christian College Athletic Association (NCCAA). During that interim window, in which the university wasn’t yet eligible for NCAA postseason play, Biola made its mark with seven NCCAA team national championships: one each in women’s soccer, women’s cross country and women’s golf, and two titles each in women’s volleyball and men’s cross country — successes that coaches and players hope are a taste of more to come.

AN ALL-AROUND WIN FOR BIOLA

The move to the NCAA Division II has involved a significant investment of time, work and resources, but university leaders say the transition is already proving to be highly beneficial, both for Biola’s Athletics and for the university as a whole. From greater life-balance for student-athletes to an increased level of competition, here are just some of the ways that administrators and coaches say the university is benefiting from becoming part of the NCAA.

The NCAA prioritizes and protects student-athletes by emphasizing “Life in the Balance,” so that students can focus on their academics and develop holistically. In pursuit of this, practices and team activities are controlled and monitored, resulting in generally fewer games, decreased practice times, a shorter offseason and mandatory breaks during Christmas and summer.

Miller said this initiative is a great fit for Biola because of the university’s already existing emphasis on students’ spiritual development.

“Being able to compete as a Christian student-athlete, and in that order of priority — Christian, student, athlete — that allows us to live out that life in the balance,” she said. “That’s already part of the Division II philosophy, but with Biola, it’s even deeper because of our spiritual development process that we believe in and emphasize.”

To follow the NCAA and PacWest’s best practices and expectations, Biola has increased its athletic training staff, including a full-time strength coach, a part-time licensed staff member and a contracted (volunteer) team physician. The training staff offers students more consistent medical care, resulting in a 50% decrease in season-ending injuries, as well as savings for the university’s insurance funding.

Aaron Seltzer, head coach of the women’s volleyball team in his 18th season at Biola, said the full-time strength and conditioning coach has been the greatest benefit for the athletics office as a whole.

“No longer are [our] coaches or even players leading this portion of the program but a licensed professional,” Seltzer said. “This leads to less injury, stronger athletes, and mentally challenges them to increase the health of their bodies.”

The Eagles Athletic Association (EAA), which was established in 2014, right before Biola’s decision to transition to the NCAA, has raised over $2 million for scholarships, facilities and team needs. Since the EAA was established, Biola’s athletic programs have seen a 185% increase in overall giving and an average of nearly $33,000 each year in sponsorships.

“Our Biola community has continued to rally around our athletic programs with so much enthusiasm and anticipation throughout the past three years,” said Kevin Royse, director of the EAA. “Now that we’re in the NCAA, our Biola parents, alumni and fans are thrilled. Their support has mirrored that enthusiasm and we are so grateful for God’s grace and generosity at work in our Biola community.”

Student-athletes have a stronger voice with the establishment of the Student-Athlete Advisory Committee (SAAC), a leadership council with representation from all of Biola’s athletic programs. With this committee, students have a platform to speak into the area’s vision, raise student issues, fundraise and initiate community service activities and engagement. This past year, SAAC leaders ran a weeklong mental health awareness campaign, sharing daily student stories about mental health struggles while also connecting peers to helpful resources. They also hosted leaders from other schools for a multi-day professional development workshop.

NCAA Division II is home to 24 conferences and 308 colleges and universities across the nation. Postseason opportunities include 12 men’s championships and 13 women’s championships. This level of participation and opportunity to compete at a higher level leads to an increased quality of competition. Coaches and staff have seen a higher level of athleticism among recruits, and more recruits have signed “letters of intent” to join Biola’s ranks.

“Every youth-level coach in any sport knows about the NCAA,” Seltzer said. “More often than not, the NAIA brand required an explanation of who they are and what level of athlete [we had]. ... But the NCAA brand awareness is huge and gives you instant credibility with any athlete you talk with.”

“It has given us a larger pool of student-athletes to recruit,” Goodman said. “I really believe we will see the results of that in the next few years.”

With increasing reports nationwide of student suicides and mental health issues, colleges have been focusing on increasing mental health awareness and educating students on how to seek and offer help. The NCAA’s emphasis on mental health has resulted in stronger partnerships among Athletics, Student Development and the Biola Counseling Center. Biola Athletics has developed a dedicated Mental Health and Well-Being webpage for students to stay informed about campus resources, and an online form for students to express their need for support.

“This move has opened up a whole new avenue for university recognition among the U.S. athletic population,” Seltzer said.

THE FUTURE OF THE EAGLES

Looking ahead, the Eagles are enthusiastic about the DII status and the prospect of competing for national titles and national rankings. Sophomore Alex Wright, of the men’s basketball team, transferred to Biola in 2018 from California Baptist University and is one of the team’s key returners.

“I like the fact that we are DII now,” Wright said. “It allows us to compete in postseason tournaments and to have the chance to culminate our season in the best way possible: competing for a championship.”

There’s similar excitement 25 miles across town at Azusa Pacific University. Gary Pine, director of athletics at APU, said he’s excited for what’s to come as both schools officially compete in the same conference and strive for conference titles, regional championships and recognition in the NCAA.

When APU made the decision to join the NCAA in 2012, Pine believed they made a good choice, he said, but there may have been one regret.

“In the course of time, if any regret developed it was over the loss of the strong and healthy rivalry with Biola,” he said. “The connections between our students, faculty, staff, alumni and families weren’t quite the same when APU and Biola weren’t playing meaningful games. Those days are behind us now.”

The renewed rivalry sparked a new annual competition for the “Cornerstone Cup,” which started during the 2017–18 season (Azusa holds the all-time cup count 2–0).

The rest of the Biola community is not just enjoying a newly air-conditioned gym but is visibly participating in a renewed spirit of camaraderie around athletics. Since the transition, Biola has seen sellout crowds, an overall increase in attendance and seven NCCAA national championships. Just last year, in the fall of 2018, Biola’s men’s cross country team experienced a runner’s high after earning Biola’s first PacWest conference title. For the second year in a row, the men’s cross country team won the title, and is the first team in Biola’s history to compete at the 2019 NCAA Division II Cross Country Championships. To add to this fall’s victories, the Biola women’s cross country team tied for second place.

For new and longtime fans alike, it’s an exciting time to get to experience Biola’s athletics programs, said Greg Vaughan, who recently completed a nearly 42-year career at Biola — much of which included overseeing athletics as vice president of enrollment management.

“As Biola further establishes itself in the PacWest and in the NCAA, we will have increased opportunities to speak out for the cause of Christ, achieving the kind of positive impact that reflects the mission of Biola,” Vaughan said.

Save the date for Biola’s first-ever Athletics Giving Week, Jan. 27–Feb. 1, 2020. Watch biola.edu/athletics and social media for details on how to participate and help our student-athletes #ReachNewHeights in the NCAA.