Biola just adopted a significant theological statement. Learn what it says and what it means for our future. 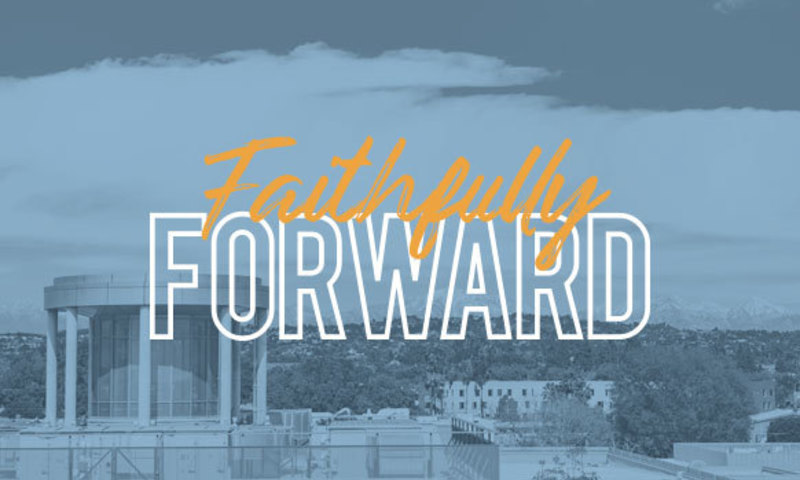 If you spend any time around Biola, you’re bound to hear the word “centered.” It’s right there in the mission statement: “biblically centered education.” President Barry H. Corey speaks frequently of being a university with a “firm center and soft edges.” And a quick search of the university’s website turns up more than 600 results for a “Christ-centered” approach to learning and living.

But what does it actually mean for Biola to have a firm biblical center? Which beliefs and convictions should be considered part of the university’s Christian core? And how can a place such as Biola ensure that it not only remains centered, but celebrates its center in the face of growing cultural pressures to dilute or drift away from sometimes-controversial beliefs?

The answers to those questions are laid out in the university’s newly adopted Statement of Biblical Principles, a significant and long-anticipated document that seeks to clarify Biola’s place as a distinctly Christian university in the 21st century. The document, approved unanimously by the Board of Trustees earlier this year, will play a vital role in the university’s future by articulating a shared set of principles for the community to live, teach and abide by.

“This statement is a way of seeing life as God intended it to be and as a prescription for both glorifying God with our lives and living in ways in which we were meant to flourish,” Corey said in a presentation this spring at which the document was first presented to the university community.

“It may be countercultural to some, but it is a life-giving and sustaining statement in today’s shifting culture. It is a statement where timeless, transcendent virtues are preserved, and we are declaring ourselves as a university more about what we are for than against.”

Why a Statement of Biblical Principles?

To grasp the significance of the new Statement of Biblical Principles, some context is helpful.

As a private Christian university, Biola has long had a set of documents that lay out the community’s shared commitments about Christian faith and conduct. The most important of these are the “Articles of Faith,” which articulate Biola’s position on foundational Christian doctrines. The Articles of Faith consist of 13 concise statements about such doctrines as the Trinity, the inerrancy of Scripture, the divinity of Christ and justification by faith alone. This document, which originated with the university’s founders, has remained unchanged since its adoption nearly a century ago and continues to be affirmed by all faculty and staff. As a way of reinforcing the document’s centrality to the university’s mission, members of the Board of Trustees have reaffirmed their commitment to these doctrines every year since 1927 by signing the “Workers’ Register and Articles of Faith.”

Over the decades, however, university leaders determined it necessary to formally clarify positions on several additional questions not covered in the original Articles of Faith. These included important theological questions and cultural developments facing the present-day church, such as sexual ethics, the sanctity of life, the work of the Holy Spirit and the relationship between science and Scripture. These clarifying statements were adopted and amended over time as part of a separate document, referred to for many years as the university’s “Explanatory Notes” and more recently as its “Theological Distinctives.” As with the Articles of Faith, the Theological Distinctives were used in the hiring of faculty and staff, and in the admissions process for certain graduate students.

In recent years, though, university leaders recognized a need to revisit the Theological Distinctives, determining that they felt too disconnected from one another and lacked a clear explanation about why Biola deemed it necessary to take a position on these particular issues.

“These distinctives were very precise, but they didn’t have any narrative or any context to try to tell people why we thought these things matter,” said Scott Rae, dean of the faculty at Biola’s Talbot School of Theology. “We wanted to have something that would communicate why these matter. In a page or two, we can’t give an exhaustive rationale. But we wanted to have something about why we thought these were a compelling vision for human flourishing.”

Thus began a lengthy process of discussing and drafting a new statement, involving careful deliberation over which specific questions to address and how best to frame them. Over the course of nearly three years, board members and faculty members worked together to discuss, write and revise a more compelling and cohesive document, soliciting input along the way from administrators, professors and even voices from outside the university. A team of theologians and writers helped to compress and fine-tune the language into its final form, which the 26-member Board of Trustees adopted unanimously in January.

What the Statement Says

The finished Statement of Biblical Principles consists of a preamble that establishes the tone and purpose of the document, followed by three sections: “God’s Intentional Design for Life”; “God’s Sacred Value for Life”; and “God’s Final Plans for Life.” Together, they offer a concise yet sweeping explanation of God’s plans and purposes for humanity, with a particular focus on how we understand our role as a Christ-exalting university in the 21st century, Corey said.

“Whereas the previous list of Theological Distinctives was just that — a list that developed over time as Biola responded to unique and concerning theological issues — the Statement of Biblical Principles is meant to read as a cohesive, winsome statement consistent with centuries of orthodox Christian belief and consistent with a faithful reading of Scripture,” Corey said. “It is a positive vision of our shared understanding, a statement we can happily embrace as a community.”

While the new statement is significant for what it adds, it’s also significant for what it continues to maintain, particularly in the face of cultural and legislative pressures surrounding marriage and sexual ethics, said Rae, who in addition to his Talbot leadership role also serves as senior advisor to the president for university mission.

“It’s rearticulating — in a more forceful but more inviting way — who we are and where we’re headed,” Rae said. “For those in the broader Christian community who are either waiting for Biola to change or wondering if we’re going to change, this answers that pretty definitively that we’re not. ... Given what’s happened at other schools, lots of folks are wondering if we’re headed down that same road. The answer, from this, is a clear and unequivocal ‘no, we’re not.’”

Indeed, the new statement reaffirms most of the core ideas articulated in the now-replaced Theological Distinctives. It affirms a biblical view of marriage, understood as between one man and one woman and for sexual intimacy to occur only in this marital covenant. It affirms a biblical view of creation as a divine act, still without comment on old earth or young earth, but with an understanding of the special creation of a historic Adam and Eve. And it affirms the sanctity of life, but in more far-reaching language — still beginning at conception but also including the sanctity of all of life until death.

On two other doctrinal positions, the statement makes adjustments in the level of specificity required of university employees. First, though less specific on Holy Spirit gifts and baptism, the new document expounds on this by expressing that in our new life in Christ, we live Holy Spirit-empowered lives.

“I will add that we need the power and the presence of the Holy Spirit more than ever these days,” Corey said.

The Articles of Faith’s longstanding references to the Holy Spirit — including the Spirit’s divinity, personhood and work in regeneration and sanctification — continue to articulate the university’s core biblical convictions.

Second, the board reaffirmed Biola’s premillennial position on eschatology — upholding the university’s interpretation that Scripture teaches a millennial reign of Christ on earth following his literal return, with the nation of Israel playing a central role in bringing the blessings of salvation to all nations during that time. However, the board voted to recategorize this view as the university’s teaching position, rather than as a part of a statement that needs to be affirmed by all faculty and staff.

“We know that not all faculty have had a formal theological education,” Corey said. “This among other things prompted the board to have extensive conversations over the past two years about the degree to which Biola’s position on eschatology must be embraced by all faculty across all disciplines. The board took this very seriously, even commissioning nine papers by scholars inside and outside of Biola to help in its considerations.”

Moving forward, the university’s pre-millennial eschatological position must continue to be held by all professors who teach Bible courses — including Talbot School of Theology and Torrey Honors Institute faculty. Others in the community, including faculty and staff, will be expected to respect the university’s teaching position even if they do not hold it or have not studied it enough to form theological convictions.

With the Statement of Biblical Principles now approved, it will play a key role in the university’s future for many years to come.

This document, understood and lived, will help to prevent the kind of missional drift that has occurred over time at other historically faith-based institutions, Rae said.

The document will also be the subject of ongoing conversations on campus, providing a way for both employees and students to learn more about the biblical basis for the statement and why the principles it affirms should not only be defended but embraced. And the principles within the document will continue to be integrated into Biola’s biblically centered education — in the classroom as well as chapels, lectures and in other resources. Rae noted, for example, recent chapels and podcast episodes that focused on the pro-life cause.

Beyond the work it does in clarifying the university’s firm center, Corey said he believes the document will help to inspire people — both within and outside of the university community — with an attractive and beautiful vision of the Christian life.

“None of us should be at Biola simply because we are willing to work within the boundaries. We should be here because we love the beautiful vision for the life that our center — our well — calls us to,” he said. “Our aim is for students to truly believe that biblical worldview claims are true, rational and capable of withstanding the best criticisms raised against them. But ideas in and of themselves are not enough. We need not only to think biblically. We need to live biblically. We need to love biblically.”

To read the Statement of Biblical Principles that was adopted unanimously the the Biola Boad of Trustees in January 2019, visit biola.edu/about/theological-positions.