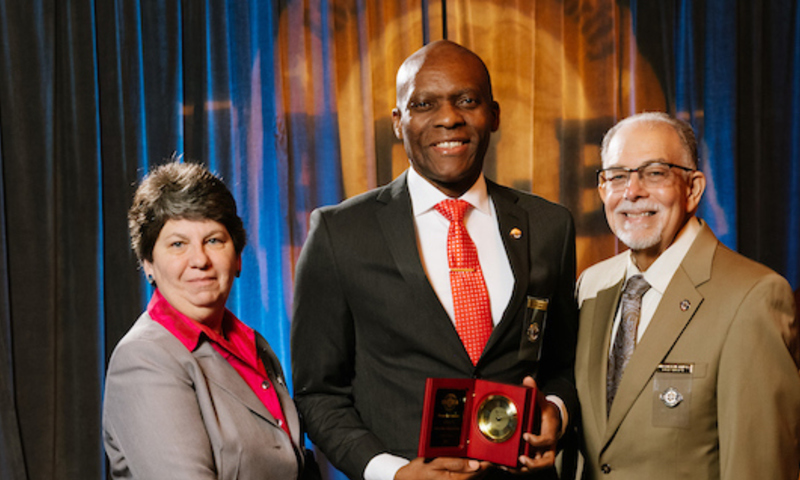 Biola was recognized for stellar leadership in campus safety this summer when two staff members received awards from the International Association of Campus Law Enforcement Administrators (IACLEA). They were recognized for their contributions to the safety of Biola’s campus — and even to the safety of other college campuses across the globe.

John Ojeisekhoba, associate vice president and chief of campus safety at Biola, was honored with a President’s Award at IACLEA’s annual conference in June in Vancouver, Canada. According to the association, Ojeisekhoba has not only ensured the safety of Biola’s on-campus community, but has significantly advanced campus safety elsewhere by leading selected chiefs from across the globe to successfully create and implement major safety strategies at their own campuses.

Ojeisekhoba had previously been named “Campus Safety Director of the Year” by Campus Safety magazine in 2015.

Veronica Baeza, manager of investigations and Clery compliance, was also honored at IACLEA’s annual conference with the Award for Merit.

“Veronica tirelessly contributed to the department strategy to resolve crimes,” said Justin Shelby, public information officer for Biola’s Department of Campus Safety. “In one instance, her work led to the recovery of 24 bicycles at a house in La Mirada. Her ability to go above and beyond reviewing video footage and follow leads is inspiring to many Campus Safety personnel. She has also contributed significantly to the department’s crime awareness and education programs within and outside residence halls.”