Wilson has published many articles in both the mathematical and biblical fields. His most recent work is the Quality of Pitch (QOP), a formula he helped develop that evaluates the quality of a baseball pitch. Jarvis Greiner (’12) a former Biola pitcher, created the formula for an extra credit assignment in Wilson’s statistics class. 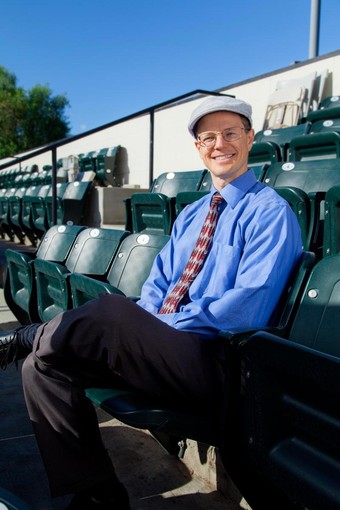 Wilson, who has his doctorate in applied statistics from the University of California, Riverside, recognized potential in Greiner’s idea and helped develop a sophisticated formula that could be presented to major league teams. The formula now measures five variables of a pitch: location, velocity, total break (horizontal and vertical), the breaking point and the maximum height.

Since Greiner’s original idea, Wilson has been working alongside him and his father, Wayne, to get the QOP to become an accepted statistic among the baseball community. They have met and talked with multiple professional teams, including the Los Angeles Dodgers, and have tested and studied Biola’s own baseball team to make improvements on the formula.

“The quality of the pitch is foundational to everything else. The batter’s skill and ability is very important, but how do you measure how well you did against a batter until you can measure what kind of a pitch he faced?” said Wilson. “So in our theory, what we are doing is the first step in a series that could go on.”

As the three wait for feedback from MLB teams about their recent proposal, Wilson continues to teach and invest in his students at Biola. He is currently working on a book called Statistical Apologetics, attempting to connect the two areas by displaying the laws and mathematics in creation that reflect intelligent design. Wilson also hopes to develop a faith integration class for the math and computer sciences department in the near future. He believes that the integration of faith in mathematics, specifically statistics, is not a far reach.

“Even in a math or statistics class, my agenda really is that students are growing spiritually while they are in the class learning about the material. That is my No. 1 thing — their personal growth,” Wilson said. “I think there’s an intellectual component to math that teaches you how to think critically and how to train your mind; statistics are super valuable for becoming a good consumer for our society. Those are all things that strengthen us as people but it’s worthless if it’s not submitted to Christ and used for his glory.”