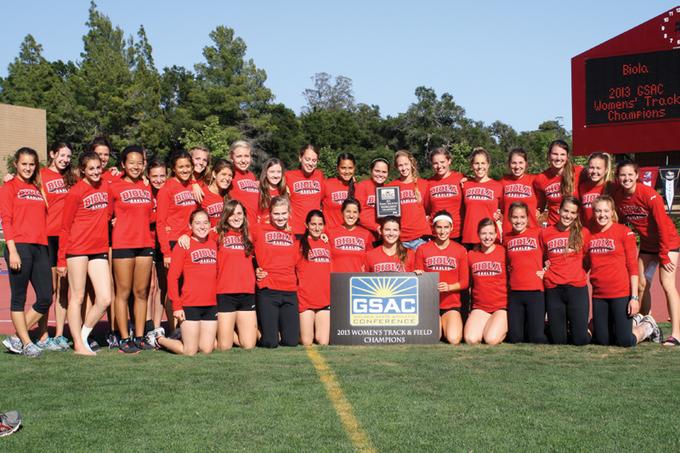 The women’s track and field team won its first-ever championship in April at the Golden State Athletic Conference Outdoor Track and Field Championships. The team took home the title by one point, beating out host Westmont College 161 to 160. Meanwhile, the men’s team finished with 91 points, good enough for third place behind Westmont and Concordia University.

The women’s championship was helped by a number of strong individual performances. Freshman Megan Crumley won two events, finishing first in the javelin and the discus. Taylor McCahon defended her GSAC title in the pole vault, clearing 12 feet, 1.5 inches. Whitney Fredenburg broke her own school record in the shot put with a toss of 37 feet, 11.25 inches.

Jay Sullenger has been selected to head the baseball team beginning next season. Sullenger, who takes over as the ninth coach in the program’s 63-year history, comes to Biola after 11 seasons as an assistant and associate head coach at NCAA Division I James Madison University.

“He has an excellent background in the game, both as a player and a coach,” said Dave Holmquist, Biola’s athletic director. “His ability to teach and motivate became obvious during the interview process. It also became very apparent that he is a strong Christian leader who will sincerely desire to impact the spiritual growth of his players.”

Sullenger is taking over for John Verhoeven, who completed his 16th season as coach in April with an overall record of 546–301–6. The baseball team finished the 2013 season with a 25–26 record.

The men’s basketball team closed out their season in February with a close loss to Hope International University in the quarterfinal round of the Golden State Athletic Conference tournament. The team ended with a record of 15-16, finishing below .500 for just the third time in coach Dave Holmquist’s 33 seasons at the helm. Forward David Cline was named a 2012–13 NAIA Division I Men’s Basketball Honorable Mention All-American.

The women’s basketball team closed out their season in March with a 16-17 record, falling to Vanguard University in the semifinal round of the Golden State Athletic Conference tournament. Biola junior center Adijat Adams added to her impressive resume as she was named to the 2012–13 NAIA Women’s Basketball All-America team as a third-team selection.

The Eagles were one of the final three teams standing in the 2013 Golden State Athletic Conference/CalPac Softball Postseason Tournament in April, but were ultimately knocked out by No. 2 seed Simpson University. The team closed out the season with a 25-28 record.

The men’s and women’s tennis teams each ended their seasons in the opening round of the Golden State Athletic Conference tournament in April. The women’s team finished the year 3–18 overall, while the men finished 2–17 overall.

Biola’s golf teams made a strong showing at the NAIA Unaffiliated Qualifying Tournament in April. The women finished tied for second out of eight teams in the field, with freshman Ava Lourenco and senior Lauren Marlow finishing in a tie for fifth out of 40 golfers. The performance by the women’s team was the best in the program’s short history and came despite wet weather. The men finished sixth out of eight teams, with Joshua Mathis earning eighth place overall.