Jerry Root (M.Div. ’78) has been a student and scholar of C.S. Lewis for more than 43 years and annually shares his passion with Biola students as a visiting professor teaching “Theology of C.S. Lewis” summer courses. On the occasion of the 50th anniversary of Lewis’s death, we asked Root — who compiled more than 1,500 Lewis quotes as co-editor of The Quotable Lewis (Tyndale, 1994) — to share his all-time favorite quotes from the beloved writer. Below are 11 hand-picked quotes that Root says “have marked me at one level or another.” 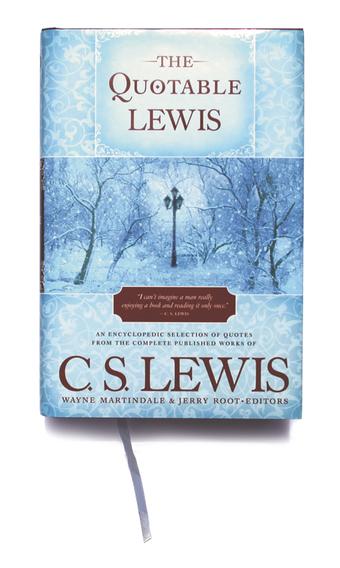 “My idea of God is not a divine idea. It has to be shattered time after time. He shatters it Himself.” (A Grief Observed)

“I know now, Lord, why you utter no answer. You are yourself the answer. Before your face questions die away. What other answer would suffice?” (Till We Have Faces)

“The task of the modern educator is not to cut down jungles but to irrigate deserts. The right defence against false sentiments is to inculcate just sentiments.” (The Abolition of Man)

“All reality is iconoclastic.” (A Grief Observed)

“If I find in myself a desire which no experience in this world can satisfy, the most probable explanation is that I was made for another world.” (Mere Christianity)

“We cannot neglect … the doctrine of objective value, the belief that certain attitudes are really true, and others really false, to the kind of thing the universe is and the kind of things we are.” (The Abolition of Man)

“Aslan … you’re bigger.”
“That is because you are older, little one,” answered he.
“Not because you are?”
“I am not. But every year you grow, you will find me bigger.”(Prince Caspian)

“God is eternal, not perpetual. Strictly speaking, He never foresees; He simply sees. Your ‘future’ is only an area … of His infinite Now.”  (The Discarded Image)

“I believe in Christianity as I believe the sun is risen; not only because I see it, but because by it I see everything else.” (“Is Theology Poetry?” In The Weight of Glory)