What Hath Football to do with Faith?

For many Christians, Sunday mornings are about going to church, while Sunday afternoons are about watching pro football games, or basketball, or baseball, or soccer — maybe even golf. For humans across the planet, sports are an important part of life. We play sports, we watch them, we talk about them, we read about them. But as Christians, do we ever think about sports in theological terms?

Why do you think sports are as prevalent and beloved in human culture as they are? What is it about sports that is appealing?

There’s sort of the good and the bad. I think on the darker side, they can sometimes appeal to the lower parts of our nature: the entertainment value of seeing a violent hit or maybe just identifying with the athlete or the team in unhealthy ways, like the parent who lives vicariously through his kids in sports. There’s a lot of the celebrity cult that goes on.

But I think the positive part is that at the elite level these are examples of people who are really trying to be the best they can be at what they do. There’s something admirable about courage or facing adversity, or just the traits that it takes to become excellent at your sport: perseverance, toiling for years in obscurity for that one shot at an Olympic medal. Sports require something of us and they give us a picture of excellence in one realm of life.

In the sports world today, what would you say are some of the big ethical questions that we should think about?

I think performance enhancing drugs is certainly one, which is part of a bigger issue having to do with technology and sports — things like the technologically enhanced swimsuits that are now not allowed. I don’t know if you can say “here’s the line” and apply it across the board; it’s going to depend on each sport. But we’ve got to think about what happens when technology starts to take away from some of the subtle abilities that a sport requires. I just read something recently about these golf clubs that are more forgiving and hit the ball farther. If you let that go too far it’s going to change the nature of the sport.

I think another issue is the value placed on winning at all costs and also the egoism of sports — the search for personal glory at the expense of everything else. Because of the popularity of sports, there’s so much access to fame and fortune that can detract from the more intrinsic goods of teamwork and even humility that can be built into sports.

Some people would argue that watching sports is a waste of time or that it’s not really edifying. How do you respond to those criticisms of the activity of watching sports as a sort of a mindless activity?

Well, it can be that, but like many things it depends on the person’s approach. Imagine two people watching a soccer match or a basketball game. One can be passive and not really glean anything of value from it. The other might think, well, what could I learn from this? You might see somebody in basketball sacrifice individual statistics for the team or you might see somebody help an opponent in a certain way after they’re injured or something like that. You might see sports as a picture of a group of diverse people working for a common goal, for excellence as a team and hopefully victory, as well. That pursuit of excellence as a group can be transferred to a church group. And even in some ways it’s a faint reflection of the Trinity — a unity and diversity of roles. I remember reading something about that in one of Wayne Grudem’s systematic theology books when I was a student at Talbot. There’s something valuable about people coming together for a common goal and putting the interest of the community ahead of the individual. The whole of human life is on display in sports: You see how people react to both success and failure, and how they learn from it. 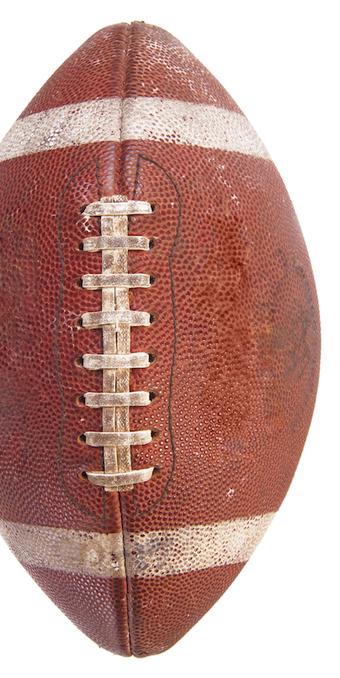 In your opinion, are some sports better than others to watch?

I don’t like the mixed martial arts, that whole ultimate fighting stuff. I think that it just seems too much like bloodsport to me, too dangerous. You know, I’ve even recently been thinking about American football and the statistics about the long-term impacts on players. Many of them have short careers and maybe two-thirds have permanent injuries; many are divorced and 20 percent are clinically depressed. I think the average life expectancy is in the 50s. I’m still a fan but I’d like to see these problems get dealt with. It starts to look more and more like gladiatorial games.

What do you make of the whole surge in NFL fantasy football leagues?

I played it for two or three years with a friend of mine in a league, and I stopped because I was just getting too competitive and was spending too much time and energy thinking about it. I’d rather invest my energy and time in other things. If you do it just for fun and don’t spend a lot of time on it, I think it’s OK. But people do spend so much time doing it, and it skews how you look at the game. I think it has a flawed view of what athletic excellence is, focusing on individual statistics and isolating individual players from their teams.

What would you say are some of the positive things in general that sports contribute?

There’s the old debate about whether sports build character or just reveal it, and I’d say it does both. But sports only builds character if athletes and coaches and parents are intentional about it. If we do sports not just as a way to gain personal glory but as a way to truly grow in character traits like teamwork or courage or self control, then it can contribute to individual flourishing. I think humility is another one. The structure of sports, if we approach it the right way, is that you have to humble yourself in terms of playing a role in the team or up to the standards of excellence in the sport.

Do you think there is or should be a distinctly Christian approach to sports? What would it look like?

I think there is, and I think it would definitely include a discussion of how sports contribute to our spiritual growth. What does it mean to truly glorify God in the context of sports? It might look different in different sports, but I definitely think there is a Christian approach. It would include considering the values of self-denial and humility, or seeing our opponents not as enemies like in a war but as competitors who are cooperating to make each other better. I play indoor soccer in an over-35 coed league, and if I just go out there by myself and play with no opponent, I’m not going to get any better. I need my opponent and they need me for us to improve. This is where sport reveals character. I might find myself being angry about something on the field and then in retrospect realize that it was valuable or that it revealed a broader pattern of sin or a character flaw I might want to work on.

Do you think sports can be an avenue for transcendence? In the same way that at a concert you might be moved in a transcendent way, can we experience that in watching sports?

In any part of human culture where the good or the beautiful or the true shows up, I think it’s fair to call those transcendent moments. In some sense it’s a reflection, however faint, of God’s character. Sometimes it’s just watching the excellence, reflecting on a beautiful play or something. Sometimes it’s reflecting on an athlete’s achievement. There was an American athlete in a recent Olympic games — I think it was the 400 meters — who pulled his muscle in the middle of it but didn’t want to quit, so he was crawling toward the finish line and then his dad comes out and helps him finish. It’s those kinds of moments where you can admire endurance and achievement and it can be a transcendent thing. So those are two kinds of transcendence in sports: the beauty that sometimes can be portrayed through athletic skill and the display of character traits like love, humility or perseverance.

Two more things. One is the 1 Timothy 4:8 passage about how physical training is of some value but godliness has value for all things. I think that from a Christian point of view we’ve got to realize that when it says “physical training is of some value,” it means it. I heard a pastor give a sermon on this and his reading was that we shouldn’t care about our physical appearance. He was criticizing our obsession with physical appearance in our society, which is true, but then he was jumping to the value of godliness. I think we’ve got to read what it actually says. There is value to physical training, even if it’s limited compared to the greater value of godly character.

My other point is that sport is a lot like religion in that we tend to divide it from the rest of life. Just like the Christian might say, “That’s my religious life, here’s my business life, here’s my home life,” we also tend to do that with sports. We can justify [bad] attitudes or words or actions because it’s sports. But from a Christian perspective we really can’t justify these things in any context. My hope is that at the level of practice believers can try to integrate their faith in Christ with watching, playing and parenting with respect to sports.

Michael W. Austin (M.A. ’00) is an associate professor of philosophy and religion at Eastern Kentucky University and the editor of Football and Philosophy: Going Deep. Follow him at michaelwaustin.blogspot.com or on Twitter @michaelwaustin.