Inside a camp for war victims in Darfur three years ago, researcher Dorothy Morgos found herself surrounded by members of the Janjaweed, a lawless militia known to rape, maim and kill. Yet, somehow, she felt strangely calm. 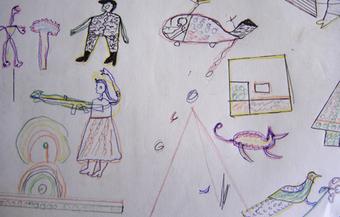 When she looked into the desert, she saw images of crosses. She knew it was a message from Christ. He was there.

The Janjaweed held up the camp for 30 to 40 minutes. Then, without explanation, they left.

“There was never a point where I felt, ‘This might be the end.’ I just knew it was not time yet,” said Morgos (M.A. ’01, Ph.D. ’06), whose research in Darfur has put her face to face with the evils of genocide.

“I felt Christ’s presence. He gave me strength. If you asked me right now to go and do it again, I’d say yes, 100 percent. And it’s not because I’m brave. Christ loves these kids. It’s always been my passion to work with families and war victims.”

Morgos, now a researcher at Yale University, traveled to the Darfur region in western Sudan in late 2005 to interview children in an internally displaced persons (IDP) camp to determine how war affected their mental health. An estimated 300,000 people have been killed since 2003 in the region’s ethnic conflict, while another 2.5 million have been forced to flee their homes.

Morgos’ study is the first of its kind to assess the psychosocial effects of war experiences among children currently living in war zone areas within Sudan. The study identifies some of the most prevalent war-related atrocities and their impact on the children, who have seen and been forced to do unspeakable things.

The study found that 75 percent of the children met the criteria for post-traumatic stress disorder and 38 percent exhibited clinical symptoms of depression.

Morgos — who is originally from Sudan and graduated from Biola’s Talbot School of Theology and Rosemead School of Psychology — interviewed 331 children between the ages of 6 and 17 in the camp, sometimes using rocks as a way to communicate.

“This is significant work,” said William Worden, a Rosemead psychology professor who mentored Morgos. “I think one of the things that made this study unique is the fact that she did study these children in a war zone. They aren’t in a refugee camp.”

Worden said he has a lot of admiration for Morgos.

“This is one gutsy gal,” Worden said. “All I could do was pray a lot while she was over there.”

How Morgos first got access to the camp is a story of faith that involves meeting a United Nations diplomat on an airplane and subsequently connecting with Americans involved in a non governmental organization (NGO) during a visit to Sudan in the summer of 2005 for her sister’s wedding. When she first visited the camp that August, she knew it was not the last time.

“In my heart, I just felt like I was coming back to do research and help these kids and to take the gospel to them,” she said. “You cannot go there and come back and not do anything.”

When Morgos returned to the camp in late 2005 to conduct her research, she trained Sudanese people to help her. They interviewed every child.

At times, she had to be creative in communicating with the children. In an effort to determine their ages, Morgos asked the children how many harvests they remembered. The children also drew pictures of what they had seen and experienced.

When interviewing the children, Morgos wore a cross or a shell from the sea, which has great value in the desert. She recalled interviewing one young girl who became quiet when Morgos asked whether she had been sexually assaulted. The girl began sobbing. Morgos removed her necklace and gave it to the girl.

“You are pure no matter what anybody tells you,” she told the child.

The girl was thrilled, running around the camp exclaiming, “This lady gave me the magic shell that made me all clean inside.”

Morgos said it is now her goal to return to Darfur to train people to provide trauma intervention. She is currently trying to raise support to start an NGO to treat the mental health of children, many of whom have endured the unthinkable: rape, seeing others raped, being forced to kill or hurt family members.

She recalled one child who was raped and forced to step on her unborn twin siblings taken from inside her pregnant mother.