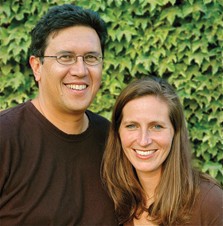 In the mid ’90s, New Zealand native Chris Elisara was working towards his Ph.D in cross-cultural communication at Biola, preparing for a life in the mission field. He came to Biola with the desire to spread the Good News of God’s kingdom holistically — through the gospel but also social justice. He soon realized that the environment is a crucial part of social justice, he said, noting that the poor are often the ones who suffer first and most directly from the effects of environmental change.

While at Biola, Elisara headed up the Evangelical Social Action (ESA) group and helped found the Earthkeepers club (now Granola), but his activism culminated in 1994 when he and his wife, Tricia Ann (’91) got the idea to start a study-abroad program for Christian college students to learn about creation care.

Following approval from the Council for Christian Colleges & Universities and the construction of a campus in Belize, the Creation Care Study Program had its first semester of students in 1996. There was no program like it at the time.

Today, the interdisciplinary program offers two semester programs in Belize and the South Pacific in which 60 to 70 students a year learn environmental stewardship amid tropical rainforests, mountain streams and coral reefs.

Elisara hopes that students in the program recognize that creation is such that we are part of it but also dependent on it.

“It’s easy to see in Belize,” Elisara notes, “because we live on a watershed and every village up and down that watershed is totally dependent on the water. What I do with my part of the stream affects the next village downstream, so if I pollute it or use too much of it, I’m not loving my neighbor. Nor am I being a good steward of God’s creation.”

In the 12 years since Elisara started the CCSP, he’s noticed that students are increasingly environmentally conscious.

“I think the debate about whether environmental stewardship is Christian or not is over,” he said. “Now the question is: How do we act as good stewards?”