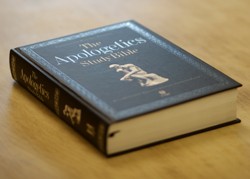 About five years ago, Biola professor J.P. Moreland touched down in Tennessee for a brainstorming session with some of the nation’s leading Christian thinkers.

Their goal: to put together a list of some of the toughest and most important questions facing Christianity and the Bible, and to give Christians a resource that offered the answers.

The result is The Apologetics Study Bible, a new tool that features articles, notes and commentary from dozens of noted Christian apologists - many of whom teach or studied at Biola - all aimed at defending the faith.

“It’s not just another study Bible that is commenting on the biblical text,” said Moreland, distinguished professor of philosophy at Biola’s seminary, Talbot School of Theology. “It is a study Bible whose sole focus is answering questions that surface from the text. It really does have to do with answering questions about the reliability of Scripture, the truth of Christianity and the reality of God.”

As one of five editors on the project, Moreland generated article topics, authored several of them himself and solicited contributions of articles and biblical commentary from others. Nearly 20 Biola professors and alumni - one-fifth of the total number of contributors - ultimately played a role in the effort.

Together, they wrote brief articles that are sprinkled throughout the pages of the Bible, answering such questions as “Aren’t all religions basically the same?” “Does the existence of the mind provide evidence for God?” and “How can the Bible affirm both divine sovereignty and human freedom?” Several Talbot professors also wrote introductions to books of the Bible and notes commenting on individual verses.

“They wanted us to deal with specific questions that somebody might have, especially of an apologetic nature, but they could be more of an explanatory nature too,” Finley said. “I had to think, ‘How would a skeptic think about this?’”

Finley said he researched criticisms of the Bible, looking for supposed errors or inconsistencies with the biblical texts that he could help to refute or explain.

Jonah, for example, is often accused of being a false prophet because he said Ninevah was going to be overthrown after 40 days, and it wasn’t, Finley said. In his commentary, Finley noted that some argue the Hebrew word for “overthrow” is ambiguous, and could simply mean “turn around” or “be changed” - which certainly happened when the city’s people repented. But a better explanation, he said, was that God intended for Jonah’s prophecy to be conditional on the reaction of the people.

Finley said the Bible project, and Biola’s strong involvement with it, reinforces the University’s standing as a leader in biblically centered education.

Moreland, a prolific author who has written extensively about the development of the Christian mind, said he hopes the study Bible will help Christians answer their own questions and doubts as well as enable them to present Christianity more effectively to others - especially in the face of ever-more-vitriolic attacks from the so-called “new atheists.”

Understanding what the Bible teaches and knowing the evidence for its truth is a part of the biblical command to love God with the mind, he said. It’s also a way to build courage and effectiveness in evangelism, he said.

And while some criticize the field of apologetics for being too argumentative or focused on simply winning debates with critics, Moreland said it’s really all about helping people to overcome barriers to faith.

“At the end of the day, people can’t believe things that they think don’t make sense,” he said. “If a person legitimately has questions, they deserve answers to those questions, and that’s really all that apologetics is.”