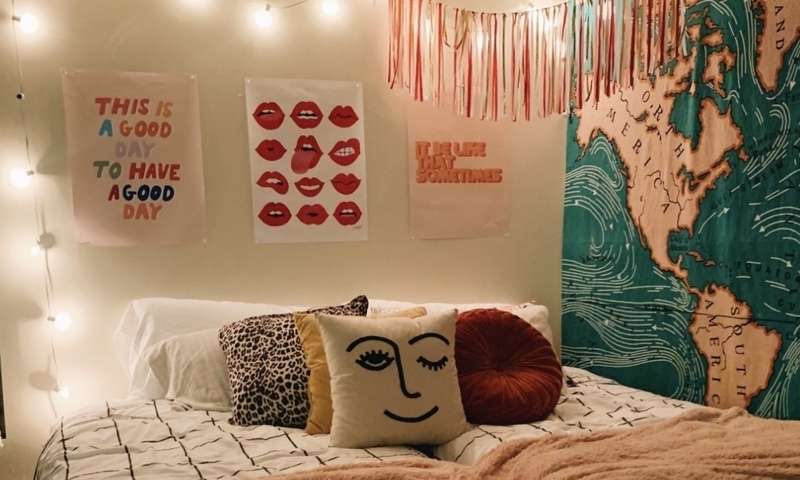 I’m back to share a little bit about what it’s like to live in a dorm! There are so many dorms on campus, all with a completely unique feel. My roommate and I both decided we wanted to live in Horton, and we were blessed to get a room on the second floor! Horton is one of the bigger, newer dorms that is most central to campus. The rooms are a great size and the community is truly special.

Until high school, I had shared one bathroom with two brothers, so I was familiar with sharing a bathroom with other people. Many people find the community bathrooms a shock, but I think they are actually quite fun. On my floor, we have a CD player (retro, I know) and my RA and a few of the girls burned CDs with fun tunes for us to blast while we’re in the bathroom. Personally, I love the idea of waking up in the morning, trudging into the bathroom and brushing your teeth with a few girls. It feels like one big family!

As far as sharing a room, I absolutely love it. My roommate, Hayley and I met on Instagram before coming to Biola. We talked so much that the first time we met in person, I felt as though I already knew her. We became close friends the summer before we moved in. Hayley and I live together and hang out together, but that is not common for everyone. It’s okay if you aren’t best friends with your roommate -- just as long as you’re civil. Hayley and I have some general “house rules” and we communicate well -- even small things such as making our beds in the morning, or feeding our fish (yes, we have a beta fish named Gill Nye!). Hayley and I also share clothes, makeup and just about everything -- it’s so much fun! However, we would not be in the place we are now without communication.

Living in a dorm is so much fun because you are constantly surrounded by people who are down for adventures. Whether that’s dorm sleepovers or meeting a new friend in the lobby and hoping in their car a few minutes later to get coffee. I love describing college as an extended summer camp (with classes, of course!).

The dorms also have dorm-specific events, one of which is my personal favorite: “All Hall”, a giant party on the lawn with everyone in your dorm! My friends and I even go crash other dorms’ All Halls--they’re a blast! My hall also hosts sleepovers and movie nights.

No matter what dorm you end up in, living in community takes work, but it’s an absolute blast. One thing I have learned is the spirit of “the more the merrier.” You’re constantly meeting new people and going to new places and it’s so important to have an open mind and allow anyone to tag along. You never know who will end up being your best friend if you just reach out and start conversation! I absolutely love dorm life -- I have no complaints!

That’s all for now folks! If you made it this far, thanks for reading!

Meet Jessie, an East coast girl from Charlotte, North Carolina. Jessie is a freshman Biblical & Theological Studies major who loves thrift shopping, crazy socks, Spongebob Squarepants and silly dancing in public places. She is always down for a spontaneous beach trip, and you will often hear her asking her friends, “Who wants to go to the beach after class?" Along with singing and making homemade lattes, you can find Jessie journaling or filming funny Instagram stories with her friends. Jessie is an extreme extrovert with a deep love for people, so if you see her around campus, come say hi! She will probably throw up a peace sign and give you a big hug.