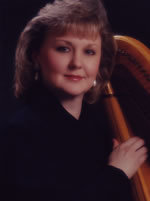 Since 1979, Mindy Ball has served as principal harp with the Pacific Symphony Orchestra and the Pacific Chorale. She is also principal harp for the Hollywood Bowl Orchestra and Opera Pacific. She was principal harp for Pittsburgh Opera from 2003–2007 under John Mauceri. She performs regularly for major national and international touring ballet companies and has recorded for major motion pictures and television, including PBS specials for Barry Manilow, American Ballet Theater, NBC's Movies of the Week, Superman and Batman cartoons and The Tonight Show with Jay Leno. Newspapers such as the Los Angeles Times and the Orange County Register have used such words as "expressive," "timely executed," "vigorous and assertive," "unflappable," "virtuosic skill," and "exciting and profound" to describe her past performances.

Ball began playing the harp at the age of 12, studying with Marjorie Call-Salzedo. She received her degree in harp performance from Chapman University, graduating with honors. She also trained with the Los Angeles Philharmonic Institute Orchestra under the distinguished American conductor Leonard Bernstein.

Ball has toured to Europe, China, and New York with the Pacific Symphony, to Japan and Brazil with the Hollywood Bowl Orchestra, and to Cancun with Johnny Mathis. For 12 years, she performed for the Pageant of the Masters in Laguna Beach and the Los Angeles Civic Light Opera. In addition, she has played for political dignitaries such as former President George H. W. Bush, former President Richard Nixon and former Secretary of State Henry Kissinger.

In 1993, Ball founded the Pacific Harp Ensemble, and serves as its director and current conductor. Along with keeping a busy freelance career, she teaches harp at Biola, Chapman, Cal State Fullerton, Vanguard and Concordia universities, as well as limited private instruction in her own studio. She is currently the president of the newly formed Orange County chapter of the American Harp Society, holding a two-year term.