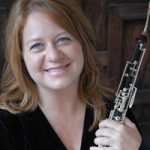 Lelie Resnick holds the position of Principal Oboe of the Hollywood Bowl Orchestra. She is also English Hornist of the Pacific Symphony and Long Beach Symphony.

Lelie has served the position of English Horn in the Colorado Symphony, Honolulu Symphony and the San Diego Symphonies. In 2004 she held a one-year position as second oboe with the Los Angeles Philharmonic. She has been performing with them since 1999, including opening performances of the Walt Disney Concert Hall and tours to Scotland, Cologne, New York, Seattle and San Francisco. In 2006, Lelie won a one-year position on English Horn with the San Francisco Symphony.

Lelie graduated from the Curtis Institute of Music in Philadelphia where she studied with Richard Woodhams. Before going to Curtis, she attended high school at the Idyllwild School of Music and the Arts, studying with Allan Vogel. She continued her studies with him at the California Institute of the Arts.

Lelie was a featured soloist on a recording with the Curtis Symphony, conducted by Andre Previn and released by EMI. She was also a featured soloist with the Honolulu Symphony and the Pacific Symphony performing Sibelius’s “Swan of Tuonela” and Copland’s “Quiet City.” She has also been active recording for Motion Pictures and Television.