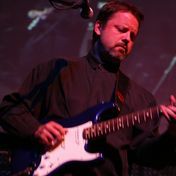 His television and commercial credits include: Late Night with Jimmy Fallon, The Wayne Brady Show, Showtime, Baywatch, Will and Grace, Coca-Cola and Oldsmobile.

His two CD’s, Storm Chaser and The Performance, have received rave reviews.
"Jackson is a rock-fusion maestro...Storm Chaser, is a guitar feast...dazzling acoustic playing" — Guitar Magazine.
“The Performance...”inspiring flashes of brilliance up and down the fretboard” — minor7th.com.

In his formative years, Doug Jackson studied with guitar legend Ted Greene. He won five Outstanding Musicianship awards from the National Association of Jazz Educators and one from the American Honor Arts Association before attending Berklee College of Music.