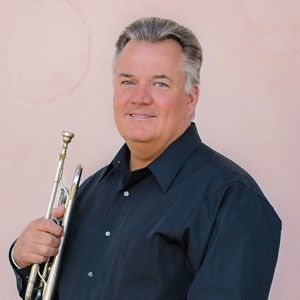 He received his Masters of Music, with distinction, from the New England Conservatory of Music in Boston and his Bachelor of Music from the Thornton Music School at the University of Southern California. His trumpet instructors have included Rob Roy McGregor, Robert Nagel, John Clyman and Joan LaRue.

David has been a featured soloist with many different orchestras including the Los Angeles, St. Louis, Knox Galesburg, Hong Kong and California philharmonics; the Los Angeles, San Diego and South Bay chamber orchestras; the Berkeley, Burbank and Glendale symphonies; the New York String, University of California Irvine and Pasadena Pops orchestras and the New York Chamber Music Society at Lincoln Center, as well as at the Santa Fe, La Jolla and Music@Menlo chamber music festivals.

David is looking forward to performing Bach’s Brandenburg Concerto no. 2 this season with the Redlands Symphony and the Los Angeles Chamber Orchestra, as well as, going on a National Tour with the Lincoln Center Chamber Music Society Concerto No. 2 in December 2018. He will also be Performing the Haydn Trumpet Concerto with the Galesburg Symphony in Illinois.

This past year, David performed the Bach Brandenburg Concerto No. 2 as well as the Telemann, Albinoni and HaydnTrumpet Concertos with the Lincoln Center Chamber Music Society, the Los Angeles Chamber Orchestra and the Galesburg Symphony.

When David is not performing, his favorite pastime is boating with his children, Timothy, Samantha, Nicholas and Julia.