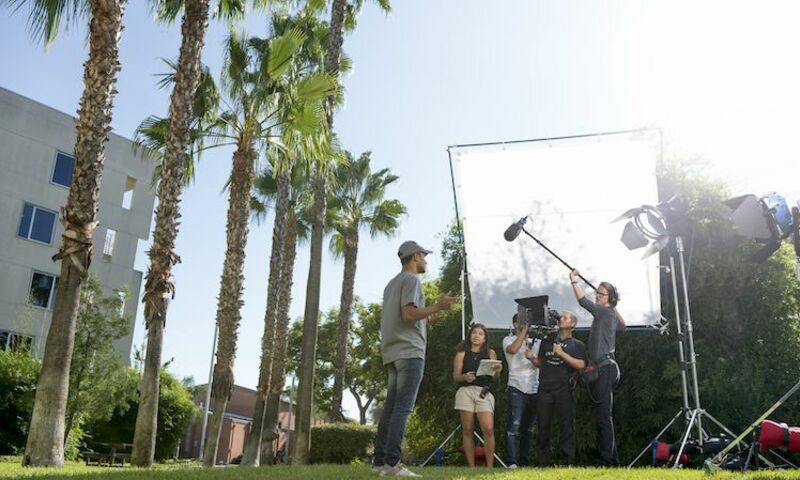 The average American adult consumes hours of media on a daily basis across screens now used in everyday life — whether it be film, television, computer or device screens. Though the end result of all media content is what the public ultimately sees or hears, the work that happens behind these screens is the vital infrastructure which provides the means for media to be created and distributed to the consumer.

“Here in Biola's Cinema and Media Arts program, we want our students to not just learn the art of media creation but also the business which surrounds it,” said Tom Halleen, founding dean of the School of Cinema and Media Arts and a 30-year veteran of the television business. “Surprisingly ignored by most film schools, it’s the business side of entertainment that determines what is made, how it’s paid for, where consumers can access it, and provides a great opportunity for employment for those wanting a voice into content creation.”

Biola University’s School of Cinema and Media Arts will launch its new fully-online B.S. in Entertainment Business in Fall 2022 to equip graduates to do just that. The fully-online degree with a flexible, asynchronous schedule will equip students to enter into the offices of the media industry where decisions are made.

Highlights of the program include learning how greenlight decisions are made, the science behind media content creation and distribution, and diving into critical topics such as networking, industry etiquette, studio/network structures, and so much more. Courses will include Content Creation and Strategy in a Digital Age, Entertainment Marketing, Media Distribution, Entertainment Law, Production Financing, Sales and Monetization, and how to identify and understand your audience.

Courses will be taught by professors across Biola’s School of Cinema and Media Arts, Crowell School of Business and the School of Fine Arts and Communication as well as additional industry experts. The program is unique as it does not require a separate application as is typical for film school students. With 11 new courses exclusively developed for this degree, the 45 unit program focuses on the business side of entertainment, geared more toward students looking to be a part of content decision-making as opposed to content production.

“To properly equip students to impact the world through the media, it’s imperative they learn how the business side operates, the 360-degrees which surround the art,” said Halleen.

Whether it be commissioning scripts, hiring producers and directors or working in content marketing and distribution, the B.S. in Entertainment Business major will equip students to enter into a variety of roles. Potential career paths for entertainment business majors include Development Executives, Programming Strategists, Research Analysts, Directors of Digital Media, Sales Planners, Marketing and Distribution Executives, as just a few examples.

From content strategy and production financing to entertainment law and distribution, students will be equipped to make critical, informed decisions that will impact one of the most influential industries in the world.

Learn more about the B.S. in Entertainment Business program.